In this line of research I investigate the developmental relation between temporal attention and rule learning in language after the first year of life. I follow the developmental progression of these two capacities by collecting data from experimental paradigms using eye tracker systems along with the assessment of general cognitive capacities and vocabulary development (Bayley-III and MacArthur scales). 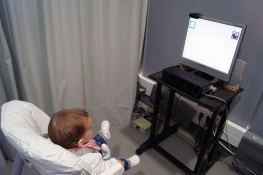 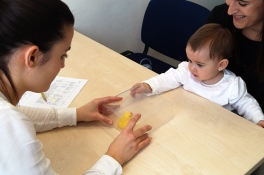 In this line of research I aim to uncover(i) how temporal orienting mechanisms develop during childhood, (ii) how these attentional mechanisms are associated with rule learning in language, and (iii) whether temporal orienting deficits are related to deficits in language impairment, by collecting data from reaction time paradigms along with the assessment of non-verbal cognitive capacities (K-Bit and ADHD scales, among others), with children, adults, and Language Impairment children.

Within this line of research, we have established a collaboration with Dr. Judit Gervain from the Laboratoire de Psychologie de la Perception (LPP) at the CNRS in Paris. Functional Near Infrared Spectroscopy (fNIRS) was used to study the brain metabolism of infants while exposed to linguistic stimulation. Our collaboration aims at studying how prosodic information -as an attention orienting cue- enhances the learning process of linguistic rules in infants.